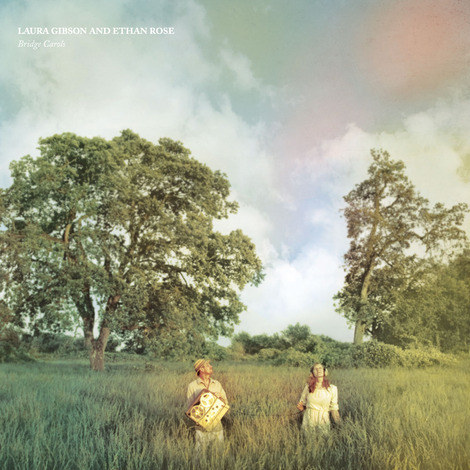 Bridge Carols, the new project from Portland, OR friends Laura Gibson and Ethan Rose, takes the listener to a place that exists between the notes and behind the words of modern music. It’s music that feels intimately familiar, timeless; at its heart, quite natural and human.

They began work on Bridge Carols by experimenting with different methods of collaboration. Inspired by Laura's voice, Ethan began building soundscapes, while Laura looked through piles of notebooks, coming across old phrases that never found home in verses or rhymes. They began recording Laura singing these unused writings.

As the project developed, Laura began improvising lyrics and wordless vocalizations, stream of consciousness singing that tumbled out of her in long trailing waves. They recorded in the basement, the forest, and the field - each session having its own unique mood as Laura reflected from subject to subject.

Ethan then took the recorded words and vocalizations from these sessions - cutting them into bits and pieces - rearranging and juxtaposing them against each other to stretch them into new musical poems. These reconstructed lyrical fragments maintained the tone of Laura's original improvisations while allowing new themes and meanings to emerge. With these vocal collages in place, Ethan would reshape tones and sounds around Laura's words. The resulting pieces developed into songs. The songs developed into Bridge Carols, a record of deep atmosphere and an almost sublingual resonance.