In a dark room, through a haze induced by fog machines, you observe celestial projections and pulsing lights. An infectious sound floods your brain-space, a driving synth-rock voyage guided by a female voice which commands attention in its come-hither breathiness. You can hardly make out the shadowy figures responsible for this electrifying experience, and much to the chagrin of photogs, you won't have much luck capturing their live set on camera. However, this disassociation proves blissful: you find yourself dissolving into their sonic atmospherics, dissolving into the packed dance-floor where your body is part of a massive, churning tide.

This transcendent experience is called Reporter. It's been popping up in warehouses, nightclubs and basements all over Portland, Oregon for the past several years. Now, the tunes which have set countless dance-floors ablaze have been laid to tape in top form, on a dazzling debut full-length entitled Time Incredible.

“
The first cut from the album is a glistening 80's synth-rock banger with groovy futuristic electro tones to kick it into high gear.
— Get Off The Coast

“
Portland band Reporter will lull you into a false sense of security then make you get off your ass and boogie - and if you’re lucky serve you up some late night French fries.
— KEXP

“
Choppy and angular, Reporter’s “Click Shaw” feels musically weighty – anchored by handclaps and a strolling bass line. But the vocals are decidedly airy, freeing the track from what could have strayed into something far more industrial than dance-centric. And it’s fantastic.
— Tympanogram

“
Nine highly polished, beaming even, songs that blend the realms of ambience, pop and electronic music together.
— Bryan Sanchez, Delusions of Adequacy

“
As challenging as it is accessible, Time Incredible lives up to its name.
— Heather Phares, allmusic

“
Using live instruments as well as samples and drum machines, [Reporter] straddles the line between rock and electronica. The breathy, sensual vocals of Alberta Poon top a dance-inflicting mix of minimal house and techno — and onstage, the group can get feed off a crowd the way a DJ would.
— Ian S. Port, SF Weekly 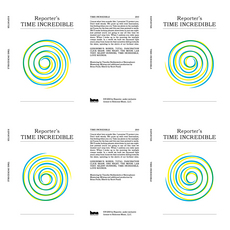