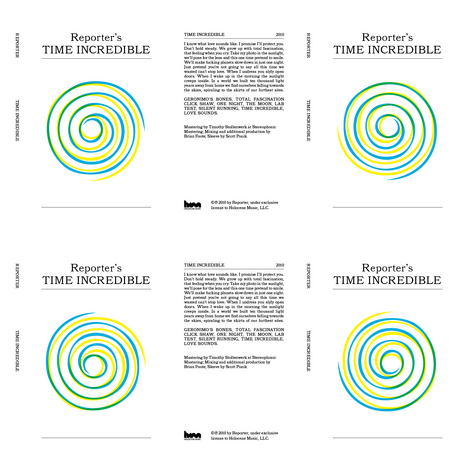 The vinyl on this release is DOUBLE VINYL, designed by awesome designer Scott Ponik!

In a dark room, through a haze induced by fog machines, you observe celestial projections and pulsing lights. An infectious sound floods your brain-space, a driving synth-rock voyage guided by a female voice which commands attention in its come-hither breathiness. You can hardly make out the shadowy figures responsible for this electrifying experience, and much to the chagrin of photogs, you won't have much luck capturing their live set on camera. However, this disassociation proves blissful: you find yourself dissolving into their sonic atmospherics, dissolving into the packed dance-floor where your body is part of a massive, churning tide.

This transcendent experience is called Reporter. It's been popping up in warehouses, nightclubs and basements all over Portland, Oregon for the past several years. Now, the tunes which have set countless dance-floors ablaze have been laid to tape in top form, on a dazzling debut full-length entitled Time Incredible.

The sci-fi connotation of the title is apt - it's clear that Reporter have kicked their time machine into gear and set their sights to the cosmos on this one. It is a remarkably ambitious collection of dance gems, seeped in the saturated hues of fantasy. In these fantastical tunes, a nightclub tête-à-tête is evoked as strongly as an intergalactic exploration. The band recorded the entirety of Time Incredible themselves and in their own studio, and their keen musicianship and recording expertise shines through on this well-polished opus.

Reporter are certainly conscious of the past, employing an arsenal of vintage equipment to create a sound influenced by Italo Disco and French House of previous decades. Simultaneously, though, they are obsessed with the future – the possibility of rising above and beyond the blasé indie rock aesthetic and onto a grand planet of light, movement, and pure energy, where a rock band can be an ecstatic phenomenon.

In this way, Reporter represents the new Portland. This is no longer Elliott Smith's Portland, the grey, depressive city that still seems to exist in the national psyche. This new, young Portland is a vibrant dance scene forged by a tight-knit community of DIY party- starters.

Consider Reporter not a band, but the explosion of a star in a dreamy far-off galaxy: among the stellar debris you find evidence of dance music and rock music; a great disco DJ alongside a tight pop group; a future manifesto attached to a vintage synthesizer as it's flung across the sky. This explosion is truly a Time Incredible.